On Tuesday, we were treated to a whole day with two Roman visitors. One was a Roman soldier and one was a retired Roman solider. They told us about Roman villas, Roman money, Roman family life, bath houses, and they even taught us how to fight like a Roman solider.They told us that in Pompeii when Mount Vesuvius erupted, people were in the bath house and a woman forgot her swimming bottoms. A couple of thousands of years later, somebody found the swimming bottoms. They were made of a sheep's skin!

"Roman day was fantastic .The Roman soldier told us where Roman soldiers put their stuff.The Roman expert let us play boules with marbles.He also let us play hot potato, just like they did in the bath houses in Roman times.They had real swords which were sharpened. We were surprised! We learned lots more about Julius Caesar."

by Amaan and Rafa.

"We got to play lots of games and it was really fun. He told us about a huge earthquake that happened just before Vesuvius erupted. People had to run away from the bath house naked. It was really funny but not really funny."

" Some children got to put oil on their arms - this is what people did in the bath houses. Some of the women wore leather bikinis. We know this because one was found recently by an archaeologist in Pompeii.They also had competitions and were really serious about winning or losing, just like us!"

by Oliver and Ben 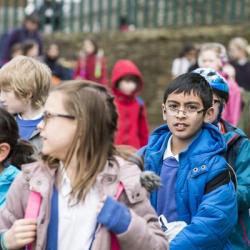 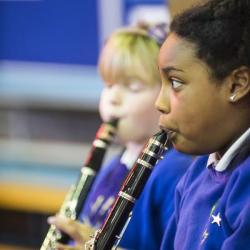